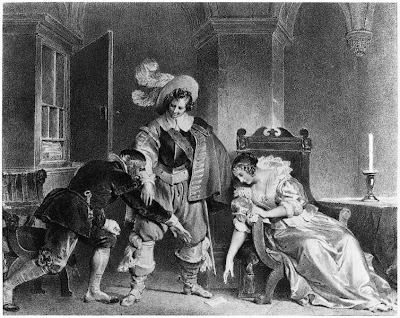 
When the Canton Symphony Orchestra mounted its production of “Madame Butterfly” in 2009, Umstattd Hall’s 1,400 seats were filled, and the opera was met with thunderous praise. Opera returned here on February 27, to an equally packed house - with Rossini’s “The Barber of Seville” – and equally met with ebullient audience approval.

The occasion also saw the return of Thompson Smillie as stage director, and once again he brought his inventive sense of making more with less. The orchestra was center stage, with the singers, in full costume, downstage. This was a distinctly scaled-down production, sans the scenic opulence we might expect in a major operatic work. The “set” was comprised of two bright red A-frame ladders, a door, and a large chair with small end table. Despite the modicum of elaborate stage paraphernalia, this visual minimalism worked very effectively to rivet attention on the human action and, of course, the singing.

And riveting it was, as this performance, by principals and orchestra alike, was nothing short of electrifying. The overture to this work (originally written three years prior to the opera) is an orchestral gem in its own right, filled with instantly recognizable melodic themes, even if none of them appear in the opera itself. But it nonetheless embodies all the infectious playfulness so characteristic of the opera as a whole. Accordingly, the orchestra played the overture with crisp, sparkling energy which it sustained – in flawless aural balance with the principal singers along with richly sonorous accompaniments by the Canton Symphony Men’s Chorus - throughout the entire afternoon.

One of the most captivating qualities of this well-paced production was the remarkable acting abilities of the principal performers. While all of them are certainly sublimely gifted singers, each brought an astonishingly well- honed theatrical sensibility to the proceedings. And, as an ensemble, their chemistry was a seamless display of impeccable comic timing that many times achieved the gleeful abandon of pure slapstick, particularly at the delightfully chaotic close of the first act.

Baritone David Small, as the barber Figaro, with a penchant for minding everybody’s business, turned in a thoroughly memorable portrait of the blustery but benevolent, money-loving rogue, full of self-praise. He agrees to connect the smitten would-be suitor, Count Almaviva, with Rosina, who is sequestered in the house of Dr. Bartolo. Small’s animated singing of the famous Largo al factotum aria, complete with chummy interaction with Maestro Gerhardt Zimmermann, was a show-stopper in itself. Tenor Timothy Culver, playing Almaviva, was convincingly plaintive and sweet in his pursuit of Rosina, and uproariously funny both in the guise of a drunken soldier, Lindoro, begging entry to Rosina’s house, and later posing as Don Alonso, her substitute music teacher. Mezzo-soprano Fenlon Lamb’s portrayal of Rosina was a masterfully adroit blending of the victimized, resentful woman given to bouts of girlish pouting, and the vivacious, willful woman longing for real love. Meanwhile, bass-baritone Noel Bouley provided a generous portion of dramatic and comedic fireworks in his role of the hopelessly frustrated and suspicion-riddled Dr. Bartolo (who wants Rosina only for her money), as did bass Nathan Stark in his powerfully expressive rendering of the shady Don Basillio, Rosina’s music tutor. In one scene, Basillio sings out a plan to discredit Almaviva by creating a scandal that he graphically compares to an exploding volcano. So volcanic was Stark’s booming crescendo that it knocked the wide-eyed Bouley out of his chair.

For sheer farcical and serpentine plot amid budding romance, this Rossini work ranks among the most thrilling and hilarious machinations in all of opera and, as a clearly satisfied Canton audience can attest, most beloved.

I had the good fortune to be at this presentation of "The Barber of Seville," and I was totally knocked out. The orchestra was top-of-the-scale, the singers were completely excellent, the staging was creatively ingenious, and the overall integration was *wow*. When Figaro sings that everybody is calling his name, and Maestro Zimmermann turns and shouts, "Hey, you, Figaro!" ... it doesn't get any better! A fantastic show that went beyond concert presentation, it presented the opera fully, with wonderfully inventive staging. Kudos all around!