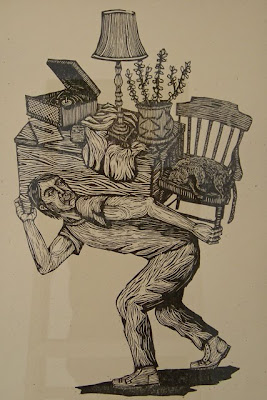 
In the statement for their collaborative installation called “Home: Ruminations on Place(ment),” currently on view at Anderson Creative, Erin Sweeney (from Peterborough, New Hampshire) and Bobby Rosenstock (from Marietta, Ohio) tell us that they like to make finely-crafted things the old fashioned way, “…using obsolete technologies and impractical labor.” That includes the labor, tools and dated “technology” associated with letterpress (a la Gutenberg) printing and woodcut images on paper ( woodcut being a fine art process dating to 5th century China, which would spread to Western cultures during the Renaissance thanks to pioneers such as Albrecht Durer). In these parts, we don’t often see exhibitions so committed to these hallowed traditions, and on that level alone the show is eminently refreshing.

The exhibit is comprised of five themed sections: Relocation, Community, Comfort, Adjustment, and Mythology. The overall effect is a gently provocative, personal - without being cryptic - and often humorous mixed-media (prints, drawings, sculpture, and fiber works) narrative on defining and finding, or leaving, ‘home,’ and how it all contributes to our identity, whether personal or communal.

The artists’ stated fervor for hand-inked blocks and manually-cranked presses is clearly present, and the finished look of the works exudes a delightfully vintage air, particularly in the woodcuts by Rosenstock. These are richly styled, meticulously carved renderings that bring to mind 18th or 19th century newsprint ads and illustrations. To further appreciate just how technically demanding woodcuts of this impeccable quality can be, don’t miss noticing the original birch plywood blocks displayed near the gallery entrance. They’re fascinating works of art in themselves.

Nostalgic, too, is Sweeney’s whimsical sculpture of three life-size, free-standing figures, called “Storytellers.” Made of stitched cotton adorned with screen prints, the figures are more like yesteryear dolls with overly-long arms and legs. The embroidered handwriting on one of the arms reads, “If you want to know someone’s life, look at their hands.” These hands are supporting upright, hardbound coptic books – ‘coptic’ being a stitching-binding technique rooted in 4th century Egypt. The images and written notes on the tall pages are personal snippets and doodles from daily life, and not unlike the visual content in Sweeney’s large mixed-media collage called “Ruminations.” It’s a loose and engaging wall work made up of six panels brimming with a kind of flow-of-consciousness that recapitulates other visual moments of the show.

Adding to the warm-hearted atmosphere of the show is an invitation to viewers to write their own stories or draw their own visuals about the idea of ‘home’ in the very nifty small booklets provided by Sweeney, which are in turn to be left inside a larger structure - something like a house in itself – for the duration of the show.


In the end, I’m left chewing contentedly on the idea that on one level, ‘home’ is certainly where we might hang our proverbial hats (maybe right next to the woodcut gouges, chisels, and oversize cardigans?), or wherever our stories have taken us. On another, it will always be where the art is.