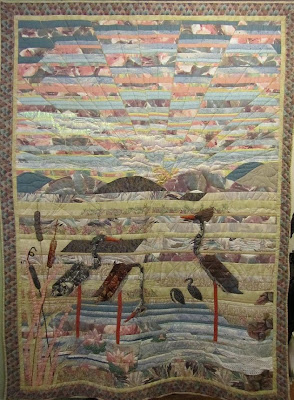 
File this one under ‘new artist on the Canton scene’: Karen Bogdan. Based on the evidence of her first-ever show of art quilts, called “Shear Warmth and Beauty,” now at Lynda Tuttle’s Art Center, it’s fair to say she’s something more than your average (though clearly adept) fiber artist. The 14 quilts here are a dazzling and varied collection of fibrous visions – hybrids, in a way - embracing both folk-art along with more contemporary sensibilities. Some are pictorially conventional, charming in their vibrant, endearing simplicity (bucolic scenes, for example). Others display a subtle complexity, deftly melding representational floral and animal imagery with abstract, asymmetrical fragmentation and patterning of the backgrounds, and at times reminiscent of the wondrously dappled colors and textures of Impressionism.

In that vein, Bogdan is a superb colorist. But one work in particular here also demonstrates a strong, perhaps even stark sense of drama. “City Flowers” is an arresting if not funereal homage to blossoms in black. Yet with its silver and crystalline accents, along with the wispy presence of gold thread work hovering about the center, it’s an elegant, sedate arrangement, and certainly more meditative than morose.

“Legend of the Dragonfly” is a gorgeous masterpiece of diaphanous patterns and textures. The lavishly intricate background makes the stunning blue mums seem all the more alive, right along with the dragonflies, their wings contoured in astonishingly tiny metallic beads.

Surely the tour-de-force of the show is “Herons at Sunset.” It’s a veritable wall of fabric-ated landscape in earth tones interspersed with delicate pastels in blue and pink. The impressive verticality of the piece is balanced by the stacked, thin horizontal bands in variegated patterns that span its entire width. Each band is an “event” unto itself, yet a harmonious element in the whole. These segments give the entire scene a fragmented look, though a well- orchestrated one, and not overly disorienting. It’s as if we’re seeing simultaneous view points of things near and far. In that sense it’s not too unlike a Cubist perspective. But unlike the flattened space of a Cubist composition, Bogdan’s panorama achieves an illusion of great depth. As the glittering orb of the sun sets into the distant hills, its golden diagonal rays seem to radiate beyond the surface as they intersect the faceted sky, seen as though through a prism, and dotted with iridescent clouds.


Shear, sheer magic. Whether intended by Bogdan or not, even the title of this show (particularly in the use of “shear”) playfully points to its depth of stylistic approaches. “Shear” refers to the cutting tool or the cutting action as it applies to textiles. But I like the play on “sheer,” too, as in pure and absolute, as well as a descriptor of transparent fabric.

Any way you look at it, the show lives up to its name.