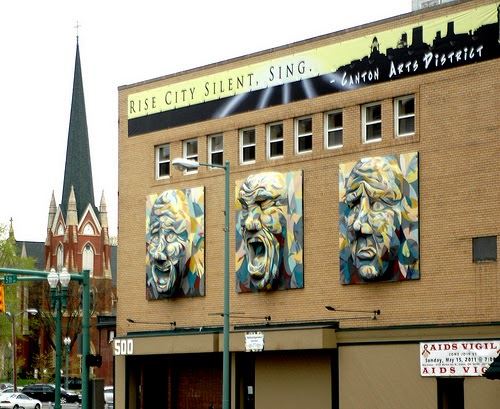 
“It would be asking too much to want to sell only to connoisseurs - that way starvation lies.”  - Claude Monet


“The object of art is not to make salable pictures. It is to save yourself.” – Sherwood Anderson


“Art is making something out of nothing and selling it.”
-Frank Zappa


First, the following (in italics) is a letter I sent to The Repository letters editor in response to an article on the Downtown Arts District. I’m happy to report that my letter was published in the Sept. 27 edition:


Dear Editor,
The article in your September 22 edition, “Part-Time Arts,” raises some serious questions as to the future of the Downtown Arts District. While I understand the desirability of galleries operating on a more regular basis during weekdays, frequency of business hours alone is no assurance of success.
Additionally, a marketing campaign launched by ArtsInStark and the Stark Convention and Visitors Bureau, no matter how lavish, is no assurance that either local citizenry or tourists will, once visiting the District, spend discretionary dollars on items beyond food, T-shirts, jewelry or other tchotchkes.
The District’s galleries are presumably in the risky business of selling and not merely showing original art. Ideally, visitors wouldn’t just look, but consistently buy. But does anyone have an ironclad formula to guarantee that kind of sustainability? I wonder. Is there even a sufficient number of Canton citizens who have the desire and wherewithal to have real art in their lives? As it is, I admire the courage of all the gallery proprietors currently making a go of it. And to the District promoters, I say happy hunting.
I was content enough to leave it at that until I read another article in the Sept. 29 Repository on plans for a new arts district in Louisville. Specifically, this quote from architect Rodney Meadows, who expressed concern over Louisville’s proximity to Canton, is provocative to say the least: “If you are going to have an arts district in downtown Canton, which is fairly strong, I just don’t know if Louisville can sustain it. Louisville is hard to support the arts. It is a sports city. It is one thing to open a space. How do you sustain it?”
How indeed? On its face, Meadows’ statement would seem to imply that Canton’s “fairly strong” arts district is somehow surviving in a thriving urban milieu. What comes to mind here is the notion of variable societal mentalities -  the age-old perceived gap between the sensibilities of the proletariat and the “cultured elite.” Does anyone out there really need to be reminded of just how wildly sports-minded greater Canton truly is and always has been (at least in my memory)?  Does being a “sports city” necessarily imply it will remain inherently arts-poor and hence an obstacle to creating a viable market for fine art? And by extension, in an ideal setting, is it possible to think of “the lower classes” not as disconnected from so much as potential partners in all our cultural pursuits?
Still, characterizing Canton’s arts district as “fairly strong” feels a bit like mild overstatement to me, particularly if you read the aforementioned Sept. 22 article. Here’s a link -


Sounds like the movers and shakers who envision Canton as an appealing “destination” are looking to inject some additional fuel into an apparently sluggish retail art machine. Now that they’ve built it, questions remain: Who will come, and why?
If Canton wants to be a serious contender in the business of being a sustainable tourist destination through an enriching, relevant art gallery corridor, then a number of challenges need to be more fully embraced. Not least among those is a concerted effort to better sensitize and educate the public both locally and regionally. There’s no shortage of accomplished, motivated and inspired artists in our midst. It may well be an impossible dream, but if the public sector as a whole isn’t attuned to the vital importance of growing a more balanced, enriching life experience, those same artists might permanently exit Canton’s confines in search of wider playing fields.
But that would be no disaster, right? After all, Canton will always have its sports.
Posted by Tom Wachunas at 6:37 AM