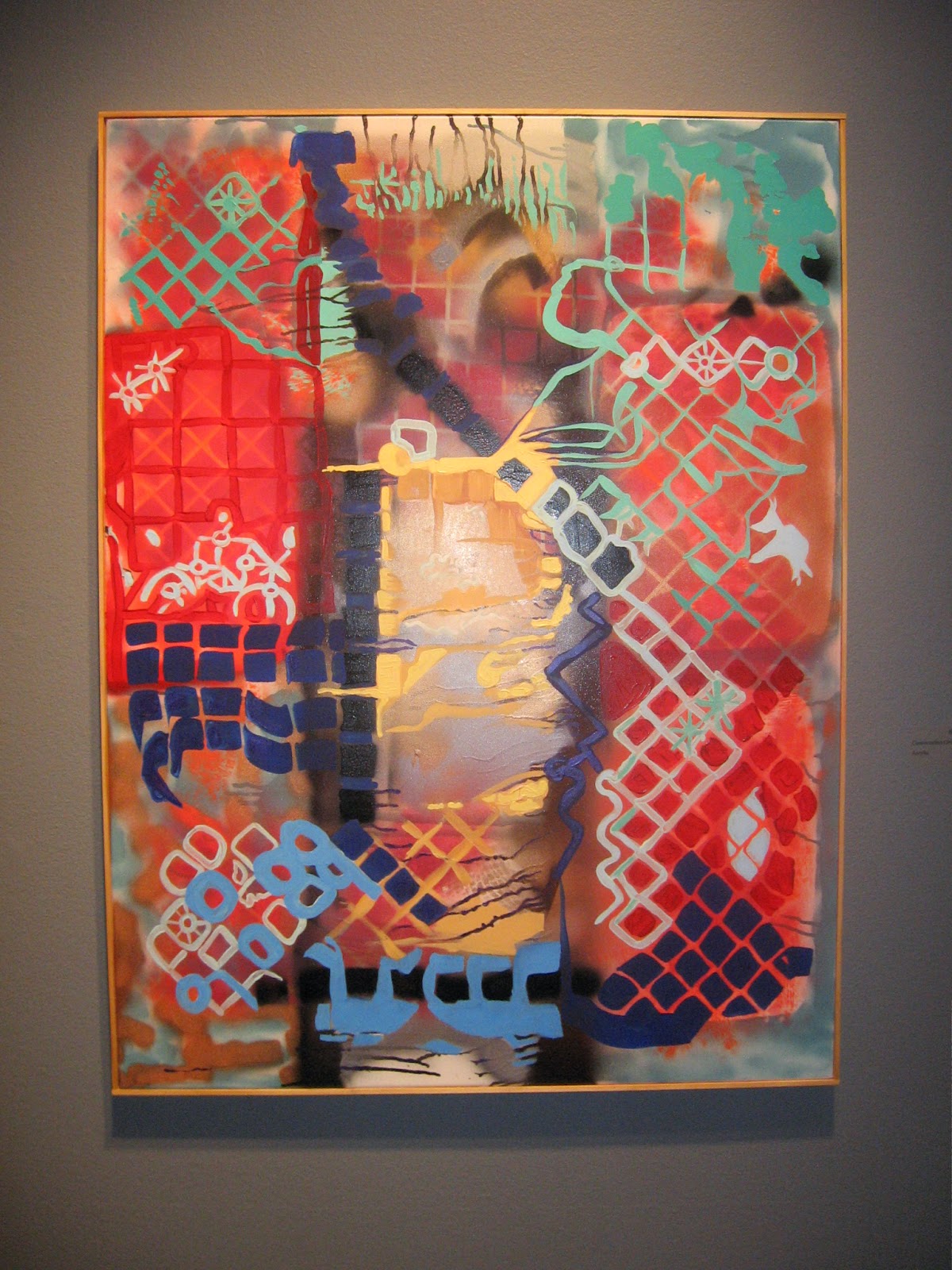 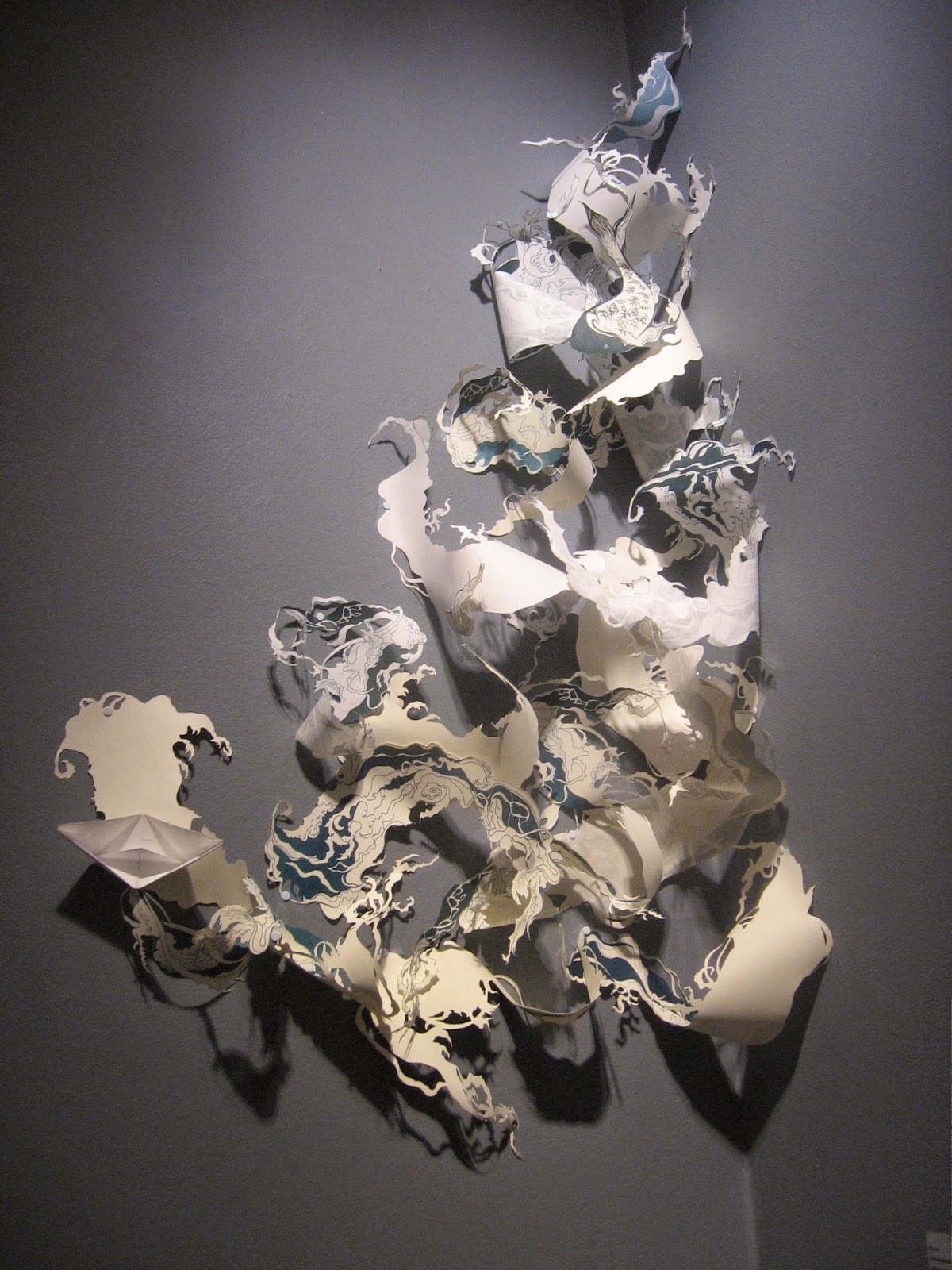 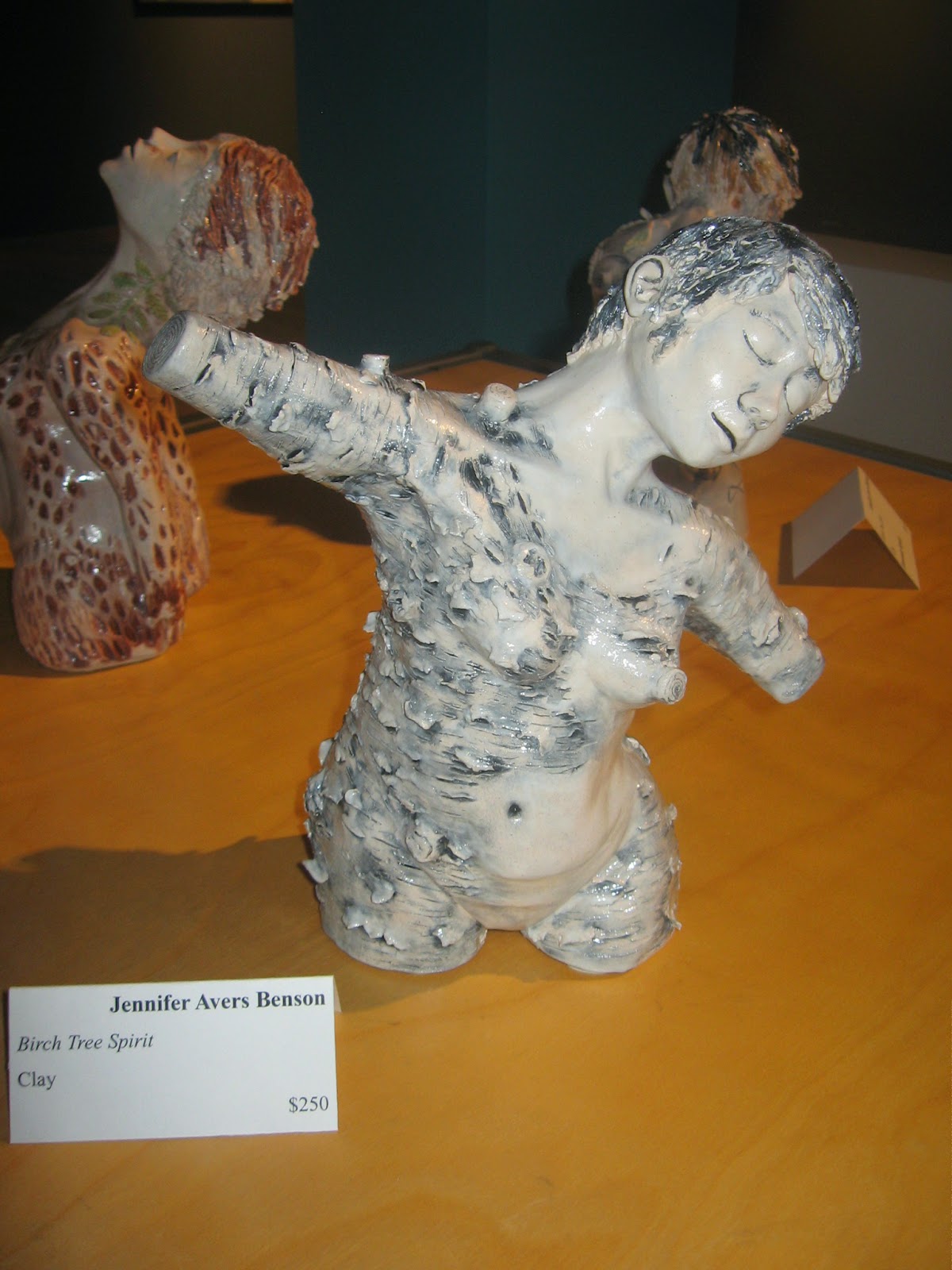 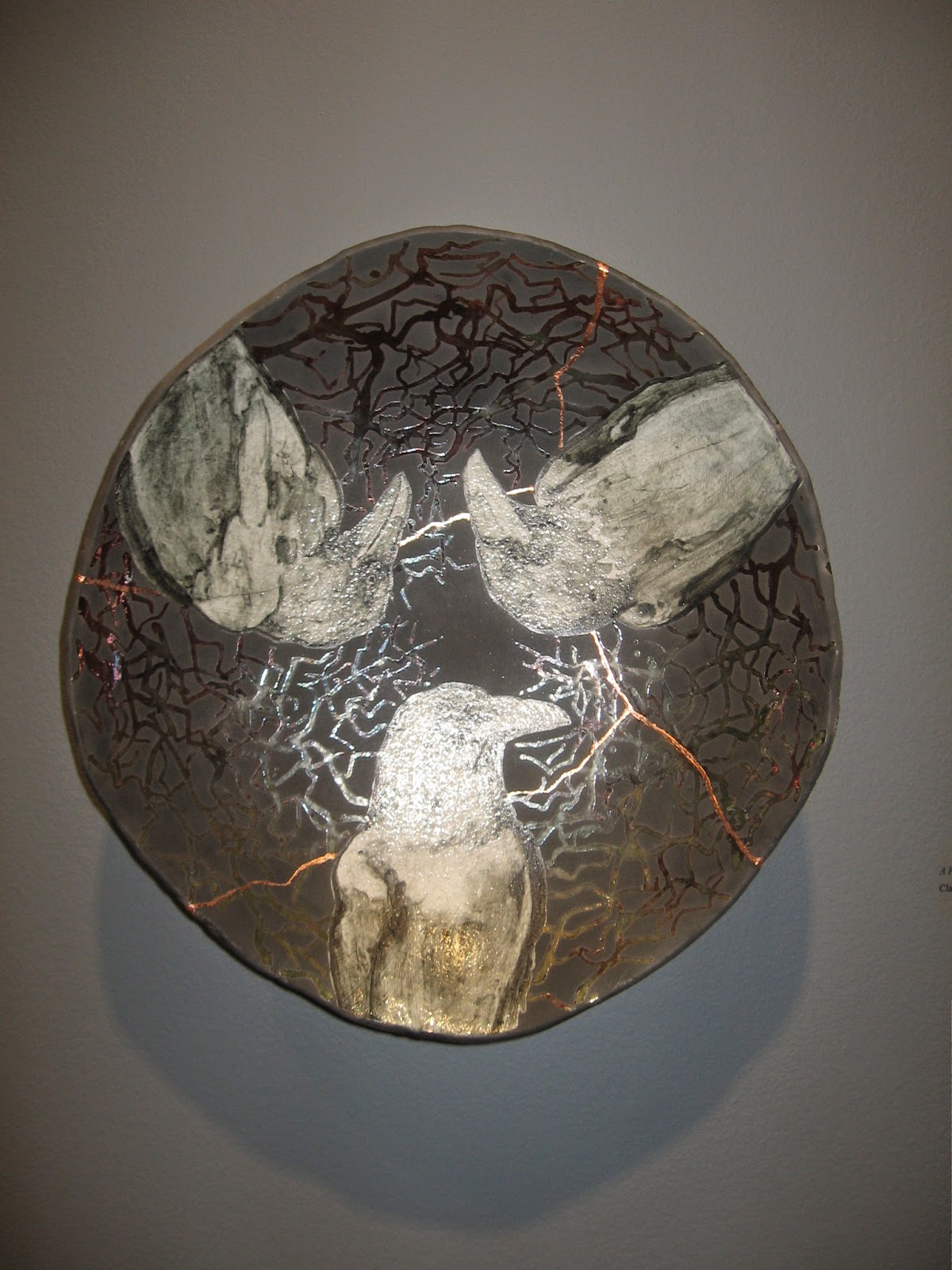 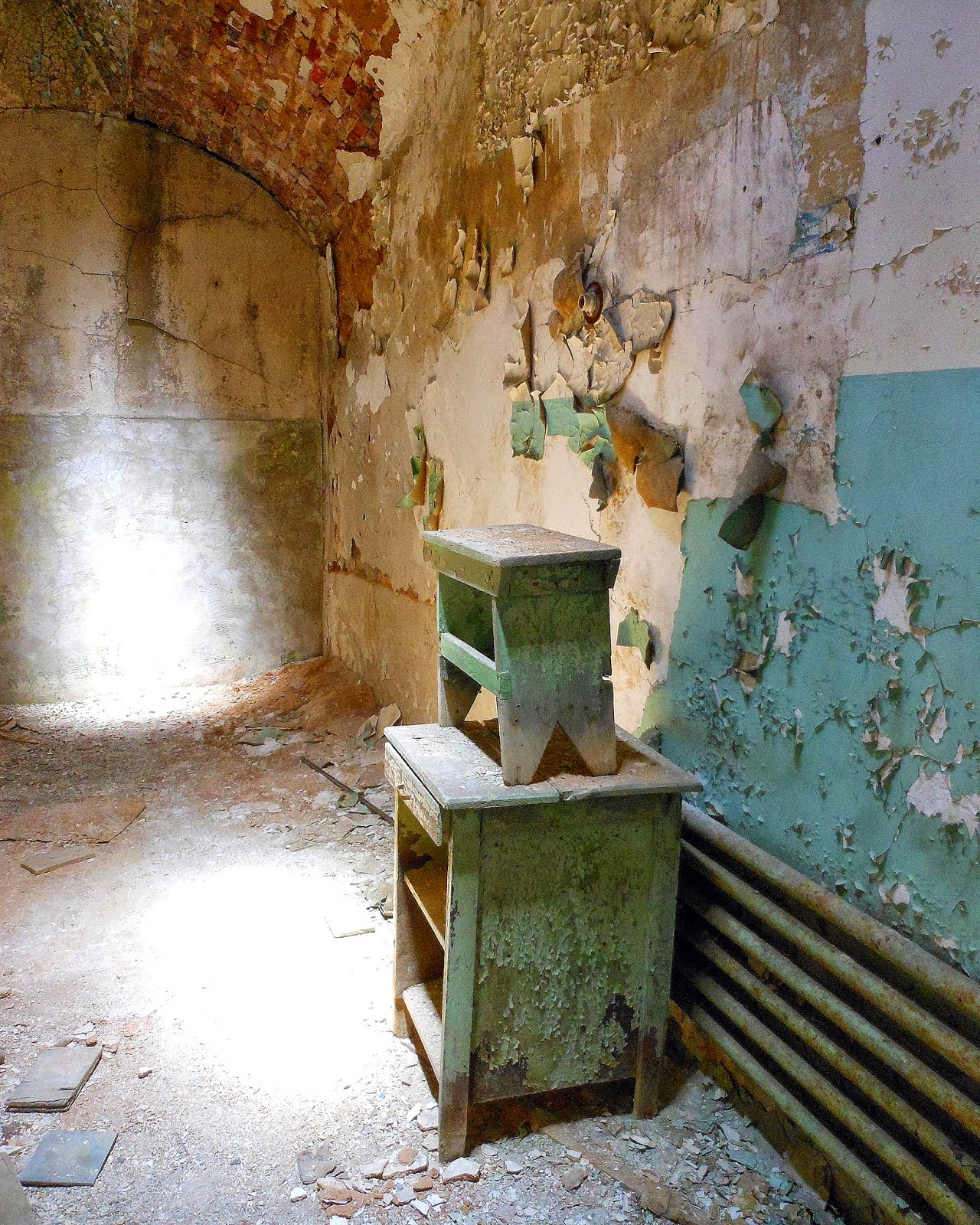 “The contemporary thing in art and literature is the thing which doesn't make enough difference to the people of that generation so that they can accept it or reject it.”  - Gertrude Stein


“There’s something happening here. What it is ain’t exactly clear…” –lyric by Spephen Stills, 1966, from “For What It’s Worth”

For those of you who have not read the review of this show by artist/blogger Judi Krew, I provide this link: http://snarkyart.blogspot.com/2014/10/stark-county-artists-exhibition-2014.html  Like her, I too have a piece in this annual juried exhibit, for which I am deeply grateful as always, and one of these days I might break my self-imposed rule against using ARTWACH to speak of my own work and devote a post to it. The jury’s still out on that one, so to speak.
Meanwhile, let me also add that there is nothing in Krew’s assessment with which I take issue, and in fact I feel compelled to re-iterate some of her larger points. You will notice the thick black redaction lines through some of her text. I understand that this was done so that her critique wouldn’t be taken as “too mean,” though for the most part I think a reader could fill in the blanks reasonably well enough. I, on the other hand, will let fly my heart and leave it to you to discern the character of its trajectory.
Jurors of group shows can often be easy targets for second guessing, especially from rejected artists, and it’s usually a fool’s errand to complain or berate their choices too much. But more than any other Stark County show in recent memory, this one practically begs for it.
So I’ll not overly indulge in subjective dickering about which artists received which awards (Best In Show, Second Place, Third Place and two Honorable Mentions). Besides, there are no surprises here, which is not to say I agree with all of them. In fact, one wouldn’t necessarily need a printed program at all to see how the jurors had tipped their hand before the official awards announcement at the opening reception on October 4. It was simply a matter of probability.  Do the math (which Krew lays out quite sensibly in her comments). Of the 34 artists represented, five artists had all three of their submissions accepted into the show when one piece chosen for the exhibit was ample enough demonstration of their skill and unique vision. Of those five artists, four were awarded something.
Award winners notwithstanding, the general quality of the artworks throughout the exhibit – whether in content, craft, or both – is wildly inconsistent. Of the 48 pieces on view, I noted about ten pinnacles of mediocrity - an unusually high percentage, it seems to me. Such wholly unremarkable works simply should not have been included, and I shudder to think how many other more deserving works didn’t make it into to this surprisingly sparse showcase.
All that said, there are more than a few entries that merit praise and attention. In the realm of clay, Laura Donnelly’s stoneware plate, Three Rabbit Day (Second Place), is a fine example of elegant ceramic exactitude. But the raku bowl by Paulette Bartenstein, A Feast of Crows, is considerably more compelling if only for its visceral rendering of the birds and iridescent glazing.
Amid the photographic entries, Michael Barath’s black and white Phoenix is an especially arresting double exposure. And Judi Krew’s  Mother and Child: Forgotten is a haunting view of an arched chamber aglow with ethereal light, like a softly colored mausoleum fallen into ruin.
The three paintings by Pamela Glover Wadsworth (one, Buttondown Bravado, awarded Third Place) constitute a prime example of the aforementioned jury overload (and certainly no fault of the artist). While her paintings deftly embrace the influence of several Abstract Expressionists of the 1950s-1960s, I was more drawn to the relatively less derivative acrylic painting by Sherri Hornbrook, Conversation Grid, with its boldly colored spatial ambiguities, and witty interplay of patterns and contemporary glyphs.
Overall, this is indeed a STARK display, right down to the almost complete absence of sculpture. To make matters worse for the few sculptures that are present, Kelly Stoddard’s abstract steel Ataxia has been shoved against a wall into a corner like an afterthought;  Lindsay Bryan’s delicately cut and printed paper Waves (Honorable Mention) has been shoddily tacked and taped into the same corner (the work would be much better served by a creative way to suspend it in open space); and the three utterly enchanting clay figurines by Jennifer Avers Benson (one of which, Beech Street Spirit, earned an Honorable Mention) have been grouped together atop a hideous, bulky wooden cabinet. Where’s an appropriately placed pedestal when you need one?
Interestingly enough, the sheer emptiness of the expansive gallery floor, combined with the generally neutral look and feel of the walls, conjures an eerie impression of an empty ballroom, awaiting the arrival of spectacularly attired guests. Ah well, maybe next year the dance will be more grand.