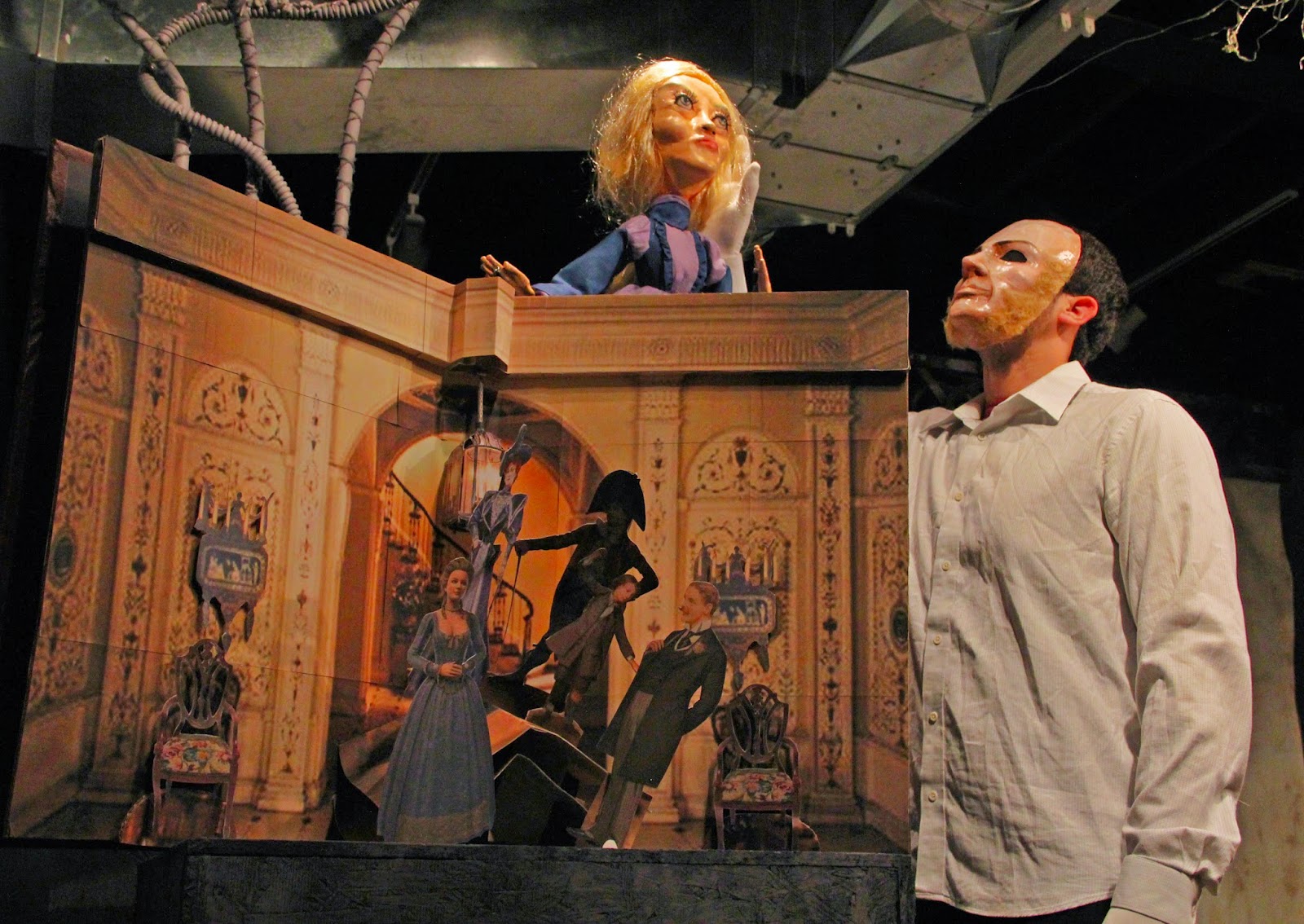 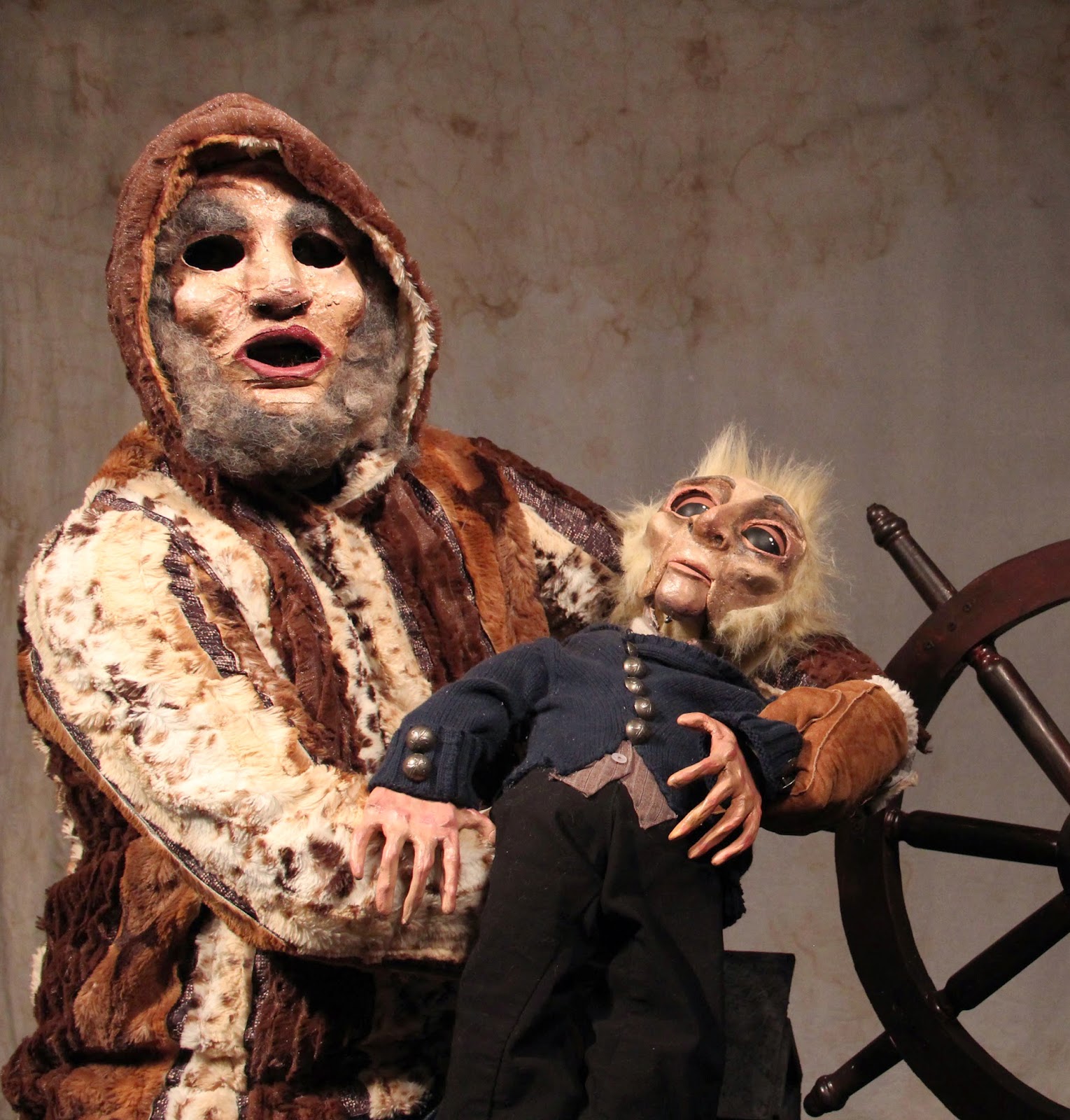 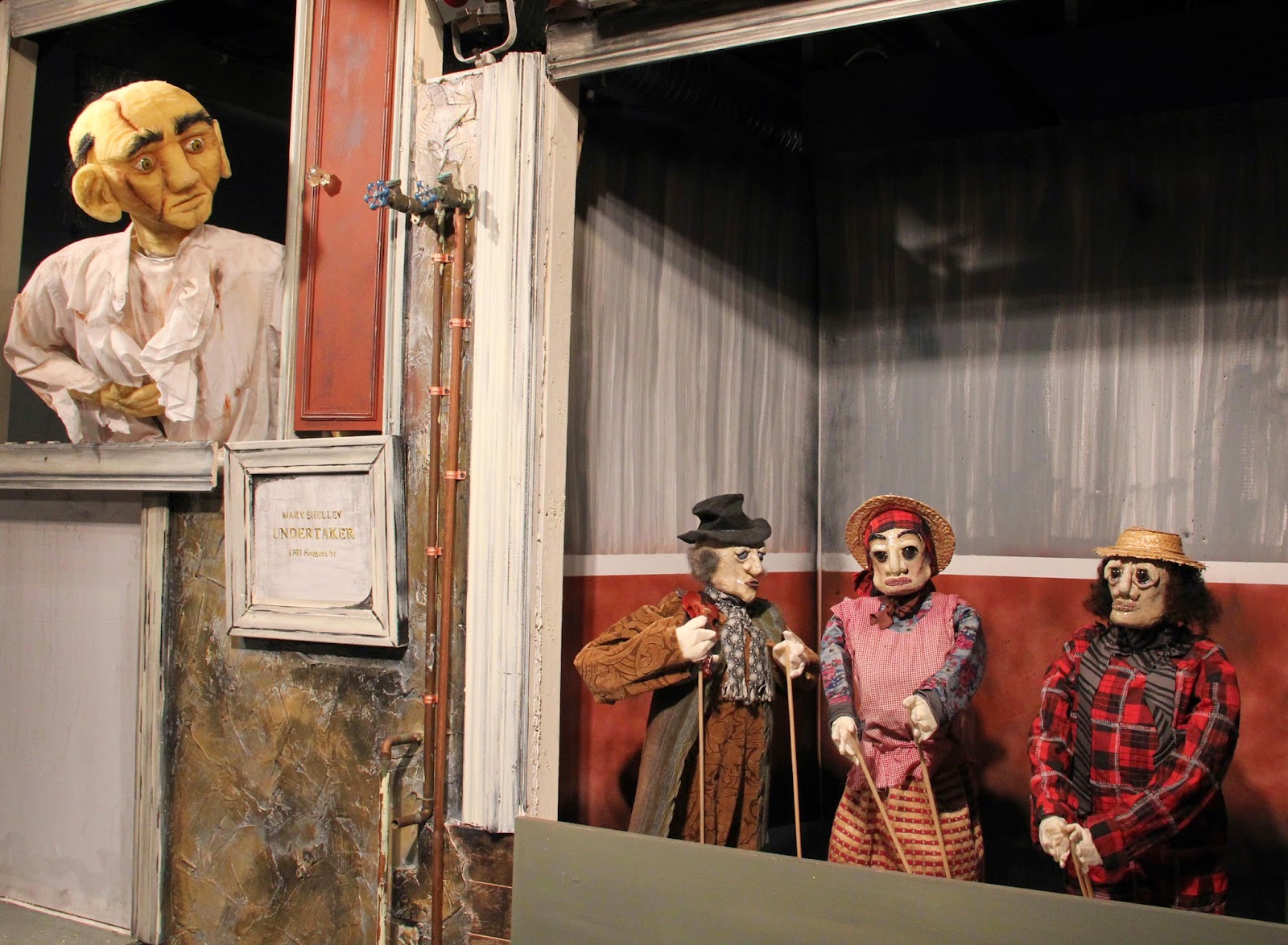 Summoned by Puppets
By Tom Wachunas


“I ought to be thy Adam, but I am rather the fallen angel…”


Once upon a time, nearly three years ago, the highly accomplished local artist Erin Mulligan-Brayton was listening to opera music and painting an image of puppets. She had also at that time been reading Frankenstein, and suddenly an idea was born – to make Mary Shelley’s 1818 novel into a puppet opera. She promptly contacted Craig Joseph, curator of Translations Art Gallery in downtown Canton.
Thus began an ambitious collaborative journey into previously uncharted theatrical territory in these parts. Joseph mobilized an eclectic group of 24 individuals into teams – conceptualizers, builders and performers. Ultimately he directed what can rightly be called a resplendently quirky hybrid of ingenious shadow play, melodramatic pantomime and puppetry (including masks, shadow puppets, rod puppets, body puppets and a marionette).
The story, finely honed into nine scenes that unfold in just under an hour, begins with Robert Walton (enacted by a masked Justin Edenhofer), captain of a North Pole-bound ship that has rescued Victor Frankenstein, stranded on the ice floes, weakened and near death from the cold. Walton nurses Frankenstein back to fragile health, and hears his woeful tale.
Throughout the performance, live black-robed and hooded stagehands (or deckhands, really) manipulate props and scrims with solemn economy of movement suggesting, perhaps, acolytes of a religious rite executing their ordained tasks. The cleverly crafted visual mechanics - including wooden nooks and niches occupied by animated shadows, ghostly video imagery (designed by Zach Christy) and exquisitely expressive puppets - have an eerily medieval feel, infused with a spirit of alchemy and conjuring. It is an urgent and tenebrous spirit, well befitting this story of an obsessed scientist who would be God, the Creator of life, and the terrible consequences of reaching beyond his own prideful grasp.
What further elevates the production from the level of a simple theatrical curiosity is its earnest embrace of operatic form. In this case, the score for the remarkable chamber orchestra (music by Steve Parsons, libretto by John Popa) has been pre-recorded (excellently mixed and mastered by Ron Flack and John King of Realgrey Records and available for purchase at the gallery). I think, though, the live audience experience could be considerably more enhanced by placing additional amplification at the front of the house, to better envelop us in the soaring drama of the music. The recorded vocal performances - from Damian Henri (as Victor Frankenstein), Bart Herman (as The Creature), Amanda Medley (as Elizabeth Lavenza), and James Graysmith (as Captain Walton) – are emotionally gripping and constitute a discretely powerful aural event in itself. There are moments – lyrically and musically – reminiscent of Sondheim-ian works at their most intelligent and intense.
An additionally compelling aspect of conveying Victor Frankenstein’s harrowing descent into torturous grief and remorse is the progressive diminishing of his physical stature. We see three masked “real person” versions (enacted by Jimmy Ferko, Christopher Hisey and Kyra Stephens) that culminate in a shrunken puppet – an emaciated doll cradled ever so gingerly in Captain Walton’s arms. Meanwhile, the created monster grows (that’s Donald Jones underneath the massive overcoat) until he teeters over all he surveys, his face frozen in a look more lonely and forlorn than terrifying.
Who would have thought that something so innocuous as a puppet show could embody the gravitas of this classic tale? This one works surpassingly well at pulling on our heartstrings.


PHOTOS by Craig Joseph and Donald Jones
Posted by Tom Wachunas at 10:32 AM