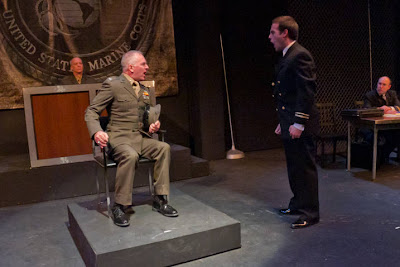 The William G. Fry Theatre is a classic ‘black box’ venue that’s a great fit for the Canton Players Guild “Stripped Away” series. Without the elaborate sets and other trappings of full-out mainstage productions, the series is designed to bring an edgy immediacy to the theatrical proceedings. In such a tightly confined environment, if the stage literature is sufficiently compelling, if the directing is sensitive and purposeful, and if the performers are skilled enough to convincingly sustain their characters under very close audience scrutiny, the results are intensely riveting.

And so it is that these elements have certainly been blended to powerful effect in the current production of “A Few Good Men,” directed here by Jeremy P. Lewis. Aaron Sorkin wrote this story of two Marines – Lance Corporal Harold Dawson and PFC Louden Downey - accused of murdering a fellow soldier, PFC William Santiago, in a “Code Red” hazing gone wrong at Guantanamo Bay, and their JAG defense lawyers who uncover a conspiracy to cover up high-level complicity. The play was produced on Broadway in 1989 and then as a film directed by Rob Reiner in 1992, starring Tom Cruise and Demi Moore as attorneys Daniel Kaffee and Joanne Galloway, and Jack Nicholson as the Guantanomo base commander, Nathan Jessep.

The action flips back and forth across time in both Washington, D.C., and the Guantanamo base, with many scene changes (a matter of quick rearrangements of a few furniture pieces) dispatched by the cast members with appropriately military precision, even if the long first act does seem to, at times, crawl instead of march. For the most part, the cast appears as very well-directed and credible (right down to their buzz-cuts) in martial authenticity – no doubt aided by three of the performers who had considerable real life experience in U.S. military service.

Stand-out performances include: Ryan Skibicki playing the accused Harold Dawson - the idealistic, stalwart Marines’s Marine; Shane Daniels playing fellow prisoner Louden Downey – shaken, needy, and with the demeanor of a deer in the headlights; John Scavelli as the wry-witted Sam Weinberg, best friend and second chair to defense counsel Kaffee, sincerely struggling to buy into defending what he considers to be a cut-and-dry case of murder. And John Green is scarily artful in his portrayal of Lt. Jonathan Kendrick, marching to his own Bible-thumping beat as he and his underlings robotically bark the Marine Code, “Unit, Corps, God, Country!”

As is often the case with plays made into popular films, iconic screen performances can prejudice our expectations of the stage experience. But here you can forget about such measuring sticks as Tom Cruise’s suave bravado, Demi Moore’s unflappable dignity and fortitude, or Jack Nicholson’s fanatical, square-jawed, vein-popping courtroom crash-and-burn as he bellows, “You can’t handle the truth!”

This cast delivers all that plus some, with dramatic elan all their own. Ryan Nehlen turns in a deeply energetic and nuanced portrait of the callow defense lawyer Daniel Kaffee, hiding deep insecurities with cocky humor that ultimately matures into a convicted conscience. Equally intriguing is Maria Work as co-counsel Joanne Galloway – impassioned, quietly vulnerable, and endearingly stubborn. And Fred Weibel captures the pathological malevolence and megalomania of Nathan Jessep – a frightening embodiment of the chasm between autonomous military bureaucracy and societal morality - with gripping panache.

Take no prisoners indeed. Handle the truth? This is theatre that demands - and gets – our undivided attention.