When Art Gets In Your Eyes 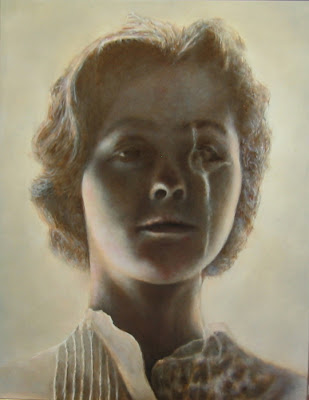 When Art Gets In Your Eyes
By Tom Wachunas

What has been will be again, what has been done will be done again; there is nothing new under the sun. Is there anything of which one can say, “Look! This is something new”? It was here already, long ago; it was here before our time. - Ecclesiastes 1: 9-10 –

“Originality is nothing but judicious imitation.” - Voltaire –

Regarding the latest installment of the annual Stark County Artists Exhibition at the Massillon Museum, I’m almost convinced that the jurors of competitive shows (in this region anyway) are required to always select a few works that intentionally strain credibility – theirs and ours. This year’s What Were They Thinking Award goes to Laurie Baker for her two paper mache sculptures: “Scary Winter Snowman” and “Full- Size Sitting Tiger”. These are simplistic, somewhat garish tchotchkes, though certainly very impressive in scale and craftsmanship. Part of the problem might be with the Museum’s practice in the last few years of jurying digital-only entries. Maybe the pieces are somehow more appealing encoded on a shiny disc and illuminated on a computer screen. Like Forest Gump’s box of chocolates, you never know what you’re going to get until you free it from its wrapper. As seen here, they’re cute and “entertaining”, but only to the extent that circus kitsch is best presented on parade floats.

A few other pieces bring up interesting questions about “originality” and appropriation of imagery not one’s own. Billy Ludwig’s “Bird Shark” is a digital image that won Second Place honors here. Imagine my surprise when fellow blogger Judi Krew informed me that her internet-savvy son noticed how Ludwig’s delightfully bizarre frankenform of a seagull and Great White was eerily similar to several images found under “bird shark” on Google Images. In fact, but for the photo-shopped background and webbed feet in Ludwig’s picture, the critters are virtually identical. IF it was someone or some entity other than Ludwig (or his personal Impale Design brand) that originally created the Google images, shouldn’t they be credited? Ludwig and many other digital artists make no secret of incorporating “found” imagery for works that bear their names. So are we OK with assuming that anything and everything on the internet, with little or no alteration, is fair game for inclusion in art, or legitimately in the public domain enough to be fodder for the contemporary art trough? How thin is the line between homage and forgery? Between an original and a counterfeit?

Related questions are posed by James Begert’s oil painting here called “War”. His piece is an instantly recognizable appropriation of an Andy Warhol Campbell’s Soup can from 1962, and truly needs no introduction or credit, being the emblematic icon of an entire art movement. Begert’s borrowing, though, is a much clearer recontextualizing of his “found” source than that of some digital artists. Eschewing Warhol’s cool industrial surfaces, Begert’s more impromptu, painterly treatment is an effectively crude awakening to 21st century marketing and consumerism of war.

But enough with the thorny stuff. As a whole, this year’s showcase of 62 works by 41 artists is notably more balanced than in years past - in variety of mediums (including more 3-D works), engaging thematic content, and depth of technical mastery. It’s gratifying, too, to see that the echoes of the Old Masters can still hold us in their thrall. Frank Dale’s stunning “Smoke Gets in Your Eyes” garnered Best In Show honors. His unquestionable mastery of the Flemish method of oil painting is in full force with this shadowy portrait of his late wife and muse. A ghostly wisp of cigarette smoke rises up her cheek and lingers over her left eye like a haunting scar. One of Dale’s accomplished students of the technique, Kristin Lupsor, received an Honorable Mention for her sumptuous, riveting portrait, “Flora”.

There’s a captivating sensuality about the two excellent still lifes by Karen Hemsley. The picture planes are intricately engineered with contrasting patterns and diagonals, unusual perspectives, and a rich palette. Deliciously mesmerizing. So too the acrylic collage by Isabel Zaldivar called “Landscape in Black and White”. It’s a fascinating abstract exploration of lavish textures and organic forms laid out with an almost photographic clarity, suggesting a churning natural environment. A similar textural intrigue abounds in the exquisite color photograph of the gnarled base of a tree, “Sleepy Old Ent”, by Scott Alan Evans.

And for the sheer power of art’s capacity to “speak” with electrifying authority, there are the two acrylic paintings by Sherri Hornbrook: “Lux” and “Visor”. My dilemma is that I’m at a loss to explain exactly what’s being said. Stumped. Flummoxed. Yet absolutely sure I’m seeing something really fresh. Yes, there are apparent derivations in these abstracts – a melding of Fauvist color with the loose expressivity and design sensibilities of such painters as Picasso, Kandinsky, Matisse, to name just some. But Hornbrook offers a compelling synthesis all her own – private, enigmatic, intensely intuitive. PRIMAL. They pose questions. I want to see them bigger. Maybe next time around. Meanwhile they linger, sweet and loud. Art will do that sometimes.

If it has been known for years that all art is repetition, clearly unoriginal, why must we disrespect the artist? Did you expect us to create anything better?

Art is also about learning and growth, not just all the abstract BS we throw up on the wall and call original. True artists have a common respect for any other artist who passionately loves doing what they do.

"The individual, man as a man, man as a brain, if you like, interests me more than what he makes, because I've noticed that most artists only repeat themselves." -Marcel Duchamp

Thanks for your heartfelt comment. Please keep in mind that it is out of RESPECT for the integrity and passion of ANY artist that I write as I do. If it's true that all art is unoriginal as you say (which I find to be a generalization that's too sweeping and ambiguous), I still think we can and must be discerning in our assessments of the degrees of quality and edification we rightfully expect from true art.

I hesitate to comment, but... As an artist in the show, I thank you for your comments. It is refreshing that you received the meaning of the painting. That is the goal above all else. Also, to the other commenter, there is no such things as criticism in art, only subjective opinion. It's all subjective. Truly an art "competition" or award is absurd in meaning. There is no right or wrong in creation , it is all good. The mere fact that someone has created something is admirable.

To add about the comment against Billy Ludwig’s piece. He is a fantastic artist and does more for the art scene around here than any single person I can recollect on. Hell, he even was willing to give me a shot to show in his gallery. The guy has a vision to make Massillon an art mecca and any assistance he needs from me will be given.

Well, let me start off by saying there is no point to wearing kid gloves because we are well beyond that.
Let’s first start with Billy Ludwig, gallery owner of the 13th floor, musician, and artist, or in some “critics” eyes a worthless hack that steals precreated art. Obviously its Billy steals all his ideas whether it is art, songs, or just ideas about trying to further Massillon or the art scene in general. In all the years I have known him I would have to totally agree with Tom in the fact that he has never done anything, and I’m sure he bribed the judges to ensure that he took something home. Oh wait, what am I thinking I’m not a critic, that isn’t actually my view or opinion at all.
My opinion on the Stark County Artists Exhibition is that well frankly after reading this I am glad I was not down there, sounds like a big waste of time. I do find it mildly humorous Tom that whenever you write about Massillon or more specifically Billy Ludwig in general it is nothing but backhanded compliments. Oh Picasso said the greatest artists steal, so clearly I can say whatever I want to about Ludwig now.
Now it’s my turn. Tom, you sir are a great writer, whether or not you know what all those beautiful large words mean or not, or you just have dictionary.com opened in a second tab is unknown, nor frankly do I care. What I do care about is how you treat my friends, or what I consider my family. Your words are not kind, they do not build or uplift. They are destructive and are in my opinion from an old close-minded fool (you). I can say that right? I mean I said you knew how to use a dictionary so I said something nice, and I totally mean it out of respect, or at least your version of “respect”.
So you know Tom you don’t have to reply to this. I know you are a callow human being, and unlike myself the good lord blessed me with a set of testicles and I am not afraid to voice how I actually feel, raw, and uncut. You sir were blessed with a strap on vagina, and well I guess that just sucks for you.
We can’t all be great artists like you, and glue junk on a chessboard and paint it white, WOW super creative! I don’t claim to be an artist, though I have been told I am quite creative in my own right. If I were ever to have a solo show I would make certain that my only request is that you were blacklisted from whatever gallery it was at. Because you are a negative, worthless human being that brings nothing to the table, but hey you are sure good at typing!

Billy Ludwig's work shows artistic depth, and an awareness of some fascinating and beautiful things.
I hope he takes note here and remembers where his references require acknowledgement.
It is not wrong to use other people's imagery, but it is not right to use it without acknowledgement.

I think this a fair and very nice review. I think it quite right to touch upon this issue.
The work in the show sounds to be of a high standard, and I shall try and get to see it all very soon. I shall now be able to view Billy Ludwig's work on its merits (there are merits for sure), but be aware of other things also.

It takes a reviewer of art to enable me to do that, sometimes.

Tom - your review encourages me to Massillon. Thank you.