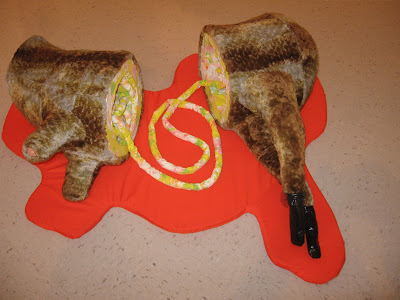 Aegolius had worked himself into one of his famously flustered states. This was always the case whenever he visited an exhibit of what he called ‘postwhatsit’ art. “Well, I’ve never seen anything quite this,” he blurted, as usual, “…and, well, I mean anything I could call…” His whiny voice trailed off into indecipherable muttering.
Nyctea stroked his shoulder gently and, as usual, cooed, “Relax. It’ll come to you.”
After a few more minutes of nervous pacing and squinting at the strange works, a wide-eyed Aegolius finally screeched, “Metamatters and matterphors!”
And just as she had done countless times before, Nyctea nodded her agreement. “Perfect,” she said.
- From “Mournings of the Grebes” by June Godwit –


Despite his habitual worrying, Aegolius never failed to eventually unpack his trusty portmanteau. In the current postwhatsit exhibit at Main Hall Gallery on the Kent Stark campus, mixed media works by five women are gathered under the title “Pleasures of Matter.” Metamatters and matterphors indeed, the peculiar objects presented here are ‘pleasurable’ enough in their tactile intrigue, to the extent that we find pleasure in interpreting iconography that vacillates between things enigmatic, personal, and somehow familiar.

For example, the curious fabric floor constructions by Kortney Niewierski on one level conjure memories of childhood and stuffed animals. While there’s a bright, sculptural sensuality about them, their titles might refer to things less innocent if not repugnant, like accidental spillages or road kill. “I-77(North)” is a zippered fabric bag, eerily embryonic with little human fingers poking through the zipper. “I-77 (South)” is a furry deer carcass neatly sliced in two to reveal gaily patterned guts splayed on a patch of orangish “blood.”

More raw still are the pieces by Susan McClelland, who works with gut, sisal rope, and latex in producing visceral “systems” of materials that have been sewn together. Most of these works have the look of reconstituted natural detritus and otherwise organic growths, and are compelling in how they suggest processes of things damaged, then repaired and healed. The persistence of life after trauma.

A connection to nature is clearly evident, too, in the captivating small objects by Kate Budd. Her wax forms, looking like various types of pods and seeds, have been cut and buffed just so, then adorned with pins or tiny glass beads. Decorating the already decorous. Not that the wondrous shapes and textures found in nature cry out for any artificial embellishments on our part. But altering these forms in this manner becomes, on one level, a truly fascinating commentary on the human tendency to not leave well-enough alone or (best intentions notwithstanding) to augment what doesn’t need to be augmented.

The three impeccably crafted works by Isabel Farnsworth seem to be at once whimsically abstract and seriously thoughtful codes for private, emotional experiences. “The Sea Inside” sits very low on the floor - a table of sorts. The top is a resin-encased wooden cut-out of a supine figure completely covered with a blue pattern of ocean waves. Supporting this surface underneath is an arrangement of equal-sized compartments, each housing a huddled figure. Quietly somber. An elegy?

Resonating throughout many of the works in this collection is the sense that the artists have processed privately important objects or events – some pleasant and some uncomfortable - and fashioned them into deeply personal symbols. For Clare Murray Adams, those memories are rooted in domestic family life and a rural, womanly ethos. Her mastery of the encaustic medium (pigments suspended in beeswax) serves her well. Its variable transparency gives her assemblages of ghostly surface patterns along with objects on, or recessed into the picture plane - such as balls of yarn, fabric swatches, and spindles - a timeless, sometimes mysterious heirloom quality without turning them into merely saccharine mementos.

And like the other whatsits here, they’re wonderfully engaging material witnesses to intimate realities.

Photo: “I-77 (South)” by Kortney Niewierski, on view in the Main Hall Gallery at Kent State University Stark, THROUGH OCTOBER 28. Gallery hours are Mon. – Fri. 11am to 5pm / Saturday 10am to Noon.
Posted by Tom Wachunas at 5:44 AM