A Species of Writing 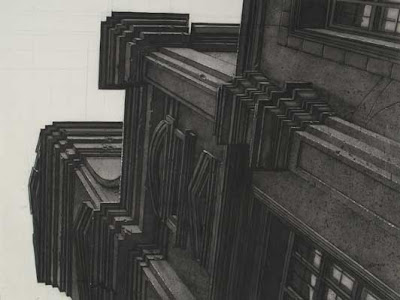 A Species of Writing
By Tom Wachunas

“All good and genuine draftsmen draw according to the picture inscribed in their minds, and not according to nature.” –Charles Baudelaire-

“Drawing is still basically the same as it has been since prehistoric times. It brings together man and the world. It lives through magic.” –Keith Haring-

Edgar Degas once defined drawing as “…the artist’s most direct and spontaneous expression, a species of writing.” Drawing as language? If we think of writing as a way of processing and externalizing internal ideas via mark-making, we can reasonably apply Degas’ definition in appreciating a broad spectrum of visual drawing styles. And it is indeed a broad spectrum of media and styles that we see in a delightful exhibit, called “Pencil Me In,” at The Canton Museum of Art. The show runs concurrently with “A Nation Divided,” and features 51 drawings from the museum’s permanent collection, spanning the 19th to the 21st century.

Just as writing is a manipulation, or configuration of symbols that collectively express either abstractions (thoughts, ideas, feelings) or concrete representations of physical realities, so also two-dimensional drawing. Good drawing is certainly not limited to reproducing super-realistic, faithful-to-nature replicas of a subject.

But when an artist does accomplish masterfully complete illusions of reality, the effect is invariably wowing, and there are some stunning examples of that here. Among those are three elegant nude studies – masterpieces of soft precision in pencil – by John Hemming Fry, and the spectacular, lavish colored pencil and acrylic “Still Life with Silver Bowl and White Cup” by Jeanette Pasin Sloan. And then there's Lowell Tolstedt's astounding tromp l'oeil colored pencil "Great American Still Life..." An artichoke, green apple, and apricot sit atop a square of crinkled foil, and their reflected colors make for a shimmering gem of pure abstraction.

Of course the discipline of drawing can be a prelude to a project in another medium. No doubt the French Realist Jean Millet practiced the lofty tradition of making many charcoal sketches in preparation for his iconic paintings of the rural working class. There are three here – two loose and fluid studies of field workers, and the more charmingly refined, pastoral “Shepherdesses.” And for all of the sketchy airiness in Charles Burchfield’s “Cicada Spirit,” executed with child-like simplicity, the small drawing exudes a largely magical, meditative energy. Similarly, there’s an eerie magic and spontaneity at work in Will Barnet’s dramatic charcoal “Emily Dickenson.” The stark figure of a woman standing on a low, barren knoll, her back to us, is made all the more haunting and lonely by a massive sky filled not with clouds, but swarming blackbirds. Like many of the drawings in this show, it may or may not have been a preparatory study for a painting, yet it is a complete – and compelling – entity unto itself.

Speaking of compelling entities, perhaps the most remarkable offering here is “Impressions: Europe #26,” a conte crayon and ink work by George Kozmon, Jr. This architectural rendering is a powerful orchestration of tonalities both deeply saturated and subtly variegated, along with intricate, rhythmic linear design and rich textures. The drawing transforms a classically- styled building - presented from a refreshingly inventive perspective - into a fascinating homage to abstract pictorial structure.

And like all great drawings of things seen in “reality,” it rewrites the familiar into something very new and surprising.