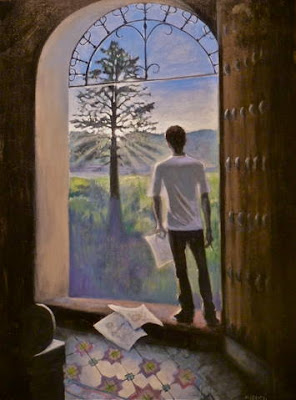 The current exhibit at Anderson Creative is an intriguing exercise in human connectivity that I think is one of the most deeply thought provoking projects to come our way since the gallery’s inception. Called “Blind / Sighted: The Perceptions Project,” the installation presents an unfolded process involving nine local residents - of varying ages, backgrounds, and walks in life – who answered probing questions in an hour-long interview, conducted by Anderson Creative curator Craig Joseph, about how they perceive themselves and how they think others perceive them. Then transcripts of the recorded interviews were turned over to two artists: painter Marti Jones Dixon and filmmaker Andrew Rudd. Based solely on those audio recordings, Dixon was assigned the task of painting a portrait of each individual, while Rudd set about storyboarding nine brief films (“microdocumentaries”) about their lives.

Rudd had the advantage of meeting each of his subjects face-to-face for a short time in the process of finishing his project, and we’re told in the accompanying background statements for the show that those meetings generated changes in his original storyboarded perceptions. I take it to mean that, based on his interpretation of the audio interviews, Rudd at first envisioned particular ways to present a comprehensive ‘picture’ of his subjects. Then he must have realized he needed to re-think his perceptions after getting to know them a little better. In his attempt to portray the essence of a person – to present who he thought these people are - he likely grappled with freeing his art enough to be a faithful descriptor of transient realities rather than just a pre-scripter of static ideas, or merely coloring in the lines, so to speak, provided by the initial interview questions (which are posted on one of the gallery walls), and the interviewees’ answers.

In any event, his finished films are lively and sensitive in their construction. Each is a uniquely engaging tableau of a life, giving us intimate views of these erstwhile strangers. We learn, among other things, something of their memories, families, values and passions as well as their physical appearance – something Dixon could not access in her decisions as to how to paint portraits of them.

The challenge forced her to relate to and render her subjects in a totally unfamiliar way. As an accomplished portraitist accustomed to working from visual cues in real time, Dixon’s paintings have always effectively captured her subjects’ subtlest nuances of countenance and postures with truly energetic, facile brushwork. But for these paintings, she needed to engage a new methodology by literally hearing her way into seeing – to intuit a sense of a whole person emerging from a “framed” narrative. While the paintings don’t reveal physical faces as such, they are nonetheless imbued with an almost mystical, beatific look that reads, when viewed in tandem with the subjects’ respective films, as somehow apropos. Most of her pictures suggest illuminated discoveries of present essences, or perhaps truths retrieved from deep contemplation, revealed in ethereal, sometimes haunting light. Many take the form of interior scenes that in turn frame an exterior scene. Savory, private moments in an outward-bound journey. In their expressive technique, and in their poetic content, these works may well be the most compellingly dramatic Dixon has ever made.

What I find most engaging about this show is the relationship between what is overtly declared about the nine “strangers” - Scott, Blu, Hugo, Kristin, Moe, Henry, Lindsey, Marian, and Aunt Bea (as I’m left with a warming desire to know them better still) - and what it tells me about the artists. As viewers, we necessarily become vicarious participants in their process, but only to the extent to which we invest our time to sincerely explore our own perceptions. More important, in as much as the show is a presentation of individual portraits and biographies, it is collectively a laudable, courageous, and affirming picture of humans authentically willing to do what is too often dreadfully absent from this world: connect with each other.