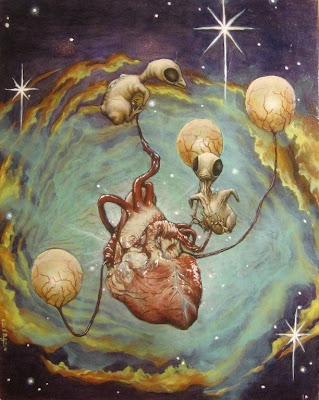 Alice laughed. “There’s no use trying,” she said: “one can’t believe impossible things.”
“I daresay you haven’t had much practice,” said the Queen. “When I was your age I always did it for half-an-hour a day. Why, sometimes I’ve believed as many as six impossible things before breakfast.”

Welcome to where honey grows on trees, ravens drive trucks, owls turn mice into living marionettes, cats have wings and webbed feet, and catfish parachute into fiery battle. Not to mention where beetles have bulldozer snouts and long-necked, three-horned elephants play croquet, among many other surreal permutations of the known universe. Welcome to Erin through the picture plane, aka “The Life of a Dream,” an exhibit of paintings by Erin Mulligan currently at The Little Art Gallery in North Canton.

Beyond what I’ve already offered here on several occasions in the last few years, there isn’t much in the way of new observations or insights I can offer about Mulligan’s work. This isn’t to say she’s been making the same painting over and over again – a practice not uncommon among some painters who settle for years on end into a comfortable stylistic niche. Yes, she continues to produce utterly intriguing and meticulous visions of an improbable – OK, impossible - world that is alternately bizarre and whimsical, yet without being too dark or repulsive. But Mulligan’s looking glass is a window on a world that’s apparently boundless in its enthralling variety of content. These are fantastic visions in every sense of the word – phantasms of places and creatures that at times seem to be allegories of “real world” situations.

Even aside from the symbolism that may or may not be present, they’re compelling for their unfettered surrender to an astonishingly fertile imagination, as well as their equally astonishing technique. Merging the detailed draftsmanship of the most accomplished nature illustrators with the classic glazing methods of the Old Masters, Mulligan is both a first-rate painter and a master illusionist in her own right. Combined with the playful taxonomic nomenclature of her titles – like “Flatus Swimmey Linearani,” “Insectus Scoopus Mammalus,” and “Flightus Amphibious Delicious” – these works are delightfully credible and entertaining documents of life lived...somewhere else.

So go ahead, have breakfast with the Queen. I bet you’ll believe a lot more than just six impossible things before you’re finished.

Photo, courtesy The Little Art Gallery: “Cosmos Umbilicus,” oil on board by Erin Mulligan, on view through November 6 at The Little Art Gallery, located in the North Canton Public Library. Also on view, original vintage jewelry designs by Kathleen Houston. gallery@northcantonlibrary.org
(330) 499 – 4712, Ext. 312
Posted by Tom Wachunas at 7:42 AM

What a wonderful post about a "full of wonder" artist! Of course, I'm a little biased. :)